Two May Miracles For Boston Now 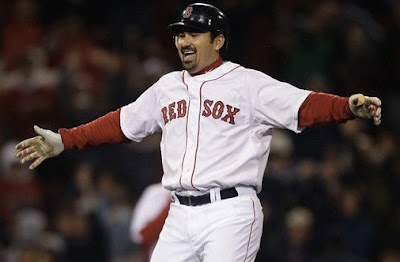 *Note a comeback from 7-0 in the seventh was in October and therefore not mentioned as much except for this.
Four years ago on Mother's Day the Red Sox capped a 5-0 deficit in the ninth to BALTIMORE with a Julio Lugo infield single to walk-off with a Mother's Day Miracle. Now, four years and four days after it happened, we're doing it again. Boston was down 6-0 in the fifth when Jed Lowrie doubled home J.D Drew, 6-1. Later, Tek singled which scored Lowrie and advanced Crawford to second, 6-2. Then Gonzalez singled, scoring Crawford and putting Varitek in scoring position, 6-3. After, Youkilis doubled to left which brought home Tek and Gonzo, 6-5. After a Mark Reynolds home run in the 7th for Baltimore, Varitek singled again and that scored Lowrie, 7-6. Finally, in the 9th, Adrian Gonzalez doubled and Ellsbury and Pedroia scored to win it for the Red Sox 8-7.
I love Boston comebacks.
Posted by Cracked Like An Egg at 4:49 PM