He is officially my favorite director now. 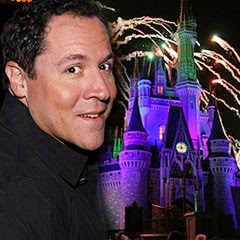 Jon Favreau said "[The story for Magic Kingdom] is essentially a family caught in Disneyland, bringing all of the attractions to life. I really want to plumb the depths of the history of the park because it's a place I love to go a few times a year. I don't think it's going to be mixing all the other movies. I think it's going to be its own thing; I don't think it will be like Night at the Museum. I want to make it a little bit spookier like the old Disney movies were and try to really capture that tone. This is something that I've always been drawn to and now to say 'What characters do you want to use and how do you not make it Space Jam or like the Christmas parade with every character?' How do you show restraint and how do you make it tie into the emotional development of the characters? I said, look I've got to watch every Disney property. I started with Steamboat Willy working my way all the way up. I really want to focus on the classic stuff like Dumbo,Steamboat Willy, all the early black and white Mickey Mouse cartoons - all the Fantasyland stuff. I think there was something timeless about what Walt [Disney] did and I want to explore, not just Disneyland, but Walt's vision of Disneyland. If you look at his concept art it diverges a little bit from what the park turned into over time; but if you look at his original concept art and really explore what that world is, I think there is something really fun and magical to be done there."
And its in production! Yay! By the time I'm about 15 or 16 it should be out. Woot!
Posted by Cracked Like An Egg at 3:57 PM