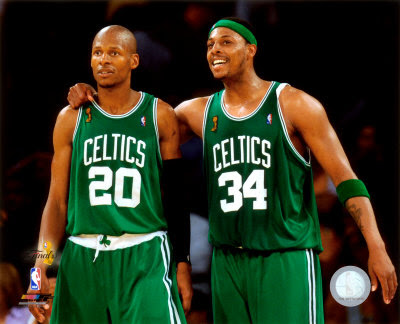 The main attraction to Boston, Orlando, Oklahoma City, Miami, Chicago, New York, L.A., Phoenix, Denver, San Antonio, Dallas, and many more fans is going to be the Three Point Contest. It features, Ray Allen, Paul Pierce, James Jones, Kevin Durant, Dorell Wright, and Daniel Gibson. Everybody is going to be watching the Boston Showdown. Ray vs. Paul. Two Celtics will compete against each other on February 19th. My prediction is Ray Allen.
The Rookie Challenge has been a classic that features the NBA's rookies taking on the NBA's sophomores. Every year the Sophomores would beat the Rookies, but last year the Rookies, featuring Stephen Curry, DeJaun Blair, and Tyreke Evans, beat the Sophomores, Kevin Love and more. This year Steph, Blair, and Tyreke are all back to face Wall, Blake, and many more. I predict the rookies again due to the fact that John Wall can set Blake Griffin up time after time. They play on February 18th.
The Celebrity Game is a time for laughs. Playing on the 18th also is popular names such as Ty Burrell, Jason Alexander, Jimmy Kimmel, Zachary Levi, Jalen Rose, and Justin Bieber (ugh.) They haven't named teams yet but what ever team Zach Levi's on is the team I predict because he's a baller.
The Haier Shooting Stars, on the 19th, is a game of trick shots and full court bombs. They have three players from four select states compete. Last year Texas, Dirk Nowitzki, Becky Hammon, and Kenny Smith, took home the title. They pick a NBA star, a WNBA star, and a NBA legend.
They haven't announced states yet but my predictions for the teams are:
(Massachusetts would definitley win.)
The Skills Challenge appeals to me because it brings out the good in short players. It is also on the 19th and you can pick your own players and the ballot will feature Stephen Curry, Baron Davis, Tyreke Evans, Derek Fisher, Tony Parker, Derrick Rose, John Wall, and Russell Westbrook. It would be awesomer if instead of Derrick Rose they had Rajon Rondo, instead of Baron it had Steve Nash, and instead of Fisher it had Jameer Nelson, and instead of Russell it had Deron Williams. A lot of ifs but what can you do. My pick is Tyreke if he gets picked.
The Slam Dunk Contest is the world renowned contest. More popular than the Home Run Derby and NASCAR race. Dwight Howard, Vince Carter, and Nate Robinson are legends in the category but it is time to pass the torch to DeMar DeRozan, Blake Griffin, Serge Ibaka, and JaVale McGee.
The obvious pick is Blake because he is second in the league in dunks. Go Blake!
Lastly it's the All-Star Game. My pick is the East because I'm a Celtics and a Magic fan. The West Team is Kobe Bryant, Kevin Durant, Carmelo Anthony, Chris Paul, Yao Ming, Kevin Love, Tim Duncan, Manu Ginobili, Pau Gasol, Blake Griffin, Dirk Nowitzki, Russell Westbrook, and Deron Williams. The East Team is LeBron James, Amar'e Stoudemire, Dwyane Wade, Derrick Rose, Dwight Howard, Chris Bosh, Al Horford, Joe Johnson, Ray Allen, Paul Pierce, Rajon Rondo, and Kevin Garnett. The East has four Celts and a Magic. Go East!
Posted by Cracked Like An Egg at 7:31 PM