I Survived the Mayan Apocalypse 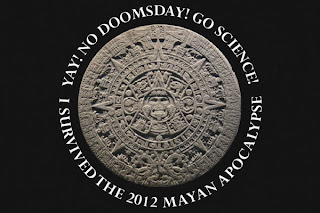 An idea for a tacky t-shirt? December 21, 2012 was often regarded as the end of the world. Alas, it was not. It was pretty anti-climatic. I remember back in sixth grade, I was sitting in my social studies class on December 21, 2009. I was thinking that three years would take a long while. I was also quite nervous that it was true. Alas, it was not. There has been a movie made about it, but nothing occurred. It was a bunch of hooplah. You can read my opinion post on it from a long while ago. I was so naive. I must say that even though nothing happened, 2012 has been a really strange year. It's come and gone like Y2K!
Posted by Cracked Like An Egg at 8:55 PM