Argument 59 - Which Red Sox Player Had The Most Unique Career After Hangin' 'Em Up? 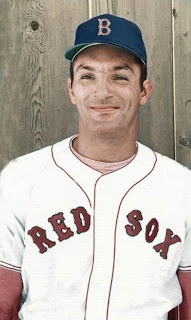 I agree with this one because of two words. Johnny Carson. But let's get to that. He played only 10 games for the Sox before being traded to the Cubs. After leaving baseball, he received a music degree from Central Michigan University. He played trumpet for the Baja Marimba Band, played with the Jimmy Dorsey Orchestra, backed up Tony Bennett, and toured with Lou Rawls. Eventually he settled in on Johnny Carson's Tonight Show as their trumpet player. Baseball to music, the transition was smooth.
Posted by Cracked Like An Egg at 7:19 PM