Gatriots News of the Week 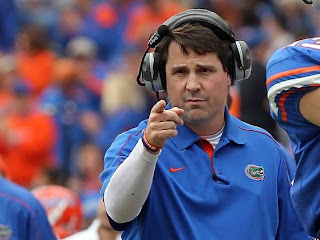 When the Gators defeated Jacksonville State, it seemed that the story line would be that Will Muschamp is up for Coach of the Year and Mike Gillislee was only 33 yards away from the season's 1000 mark. By the end of the day, though, the Gators seemed to be in position to make a bid at the BCS Championship Game. #1 Kansas State fell to Baylor 52-24 and #2 Oregon fell to #13 Stanford 17-14 in overtime. This should send Florida to #4 in the BCS Standings. Next week, if USC defeats Notre Dame and Florida beats Florida State, the Gators would be in prime position to go to the BCS Championship because Georgia and Alabama in the SEC Championship Game would be a push. Someone would lose. Jeff Driskel brought all of this to light last night on Twitter. I will never root for USC as hard as I will next week. Let's CHOMP!! 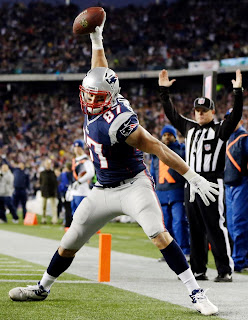 Meanwhile, the Patriots had their own game to win. Tom Brady was squaring off in a the new era of Patriots-Colts rivalry. Andrew Luck was to be ushered in and he received a rude awakening. Intercepted three times, twice for touchdowns, he was rocked all game long. Gronk caught two touchdowns, Edelman returned a kick for a touchdown and caught one, as well. Ridley added a score and the Patriots won 59-24. Aqib Talib had an amazing debut with that pick six. Patriots are raking now. They look like a team. Let's go!
Posted by Cracked Like An Egg at 8:12 PM