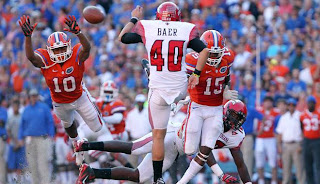 This week we learned that the Gators defense is incredible and the Gators offense is sub-par. Lead by Purifoy and Jenkins, the Florida Gators defeated the Louisiana Lafayette Ragin' Cajuns 27-20 in the final seconds. After two touchdowns and two field goals, the Gators had to come back to tie Louisiana at 20. Then, on a punt, Jelani Jenkins blocked it and it was returned 36 yards for the touchdown! The Gators win! Later that day, Georgia defeated Auburn 38-0 which means that the Gators won't be playing in the SEC Championship game. It will be Georgia instead. But not to fret, Alabama lost which means Florida will be on the up and up and will have excellent bowl position. Why not mention this? Gators men's basketball won 84-35! Absolutely dominant. That win means that the Gators had seven different games in seven different sports this weekend. They won them all. Chomp! 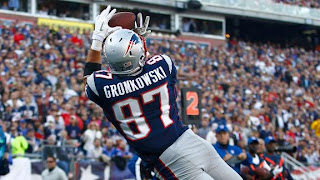 This week we learned that the Patriots offense is incredible and the Patriots defense is sub-par. Back in Foxboro, Ridley and Woodhead rushed for touchdowns. Woodhead also caught one and Gronkowski did too. The Patriots were well on their way to easily defeating the Bills, but they let 'em back in the game. Luckily, McCourty intercepted Fitzpatrick in the end zone to close the game and the Patriots won 37-31. Phew! On to the next one!
Posted by Cracked Like An Egg at 8:30 PM