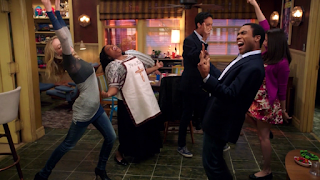 Remedial Chaos Theory is a quintessential episode of Community. High-concept, ends with a speech, the characters love each other, and uproarious humor. I remember the afternoon before it aired, one of the writers for Community tweeted that it was the best episode the show had ever done. I was a bit skeptical, but once I watched it, I knew it was something special. It was unlike any episode of television that had ever come before it. The six different timelines, the fact that Jeff is a conniving son of a bitch, the googly eyes, the subtle racism. It's all just a perfect episode. And that moment when Troy walks in through the door to witness the chaos? Put yourself in Troy's place and realize that it's a perfect moment. After all, chaos already dominates enough of our lives.
Posted by Cracked Like An Egg at 6:13 PM