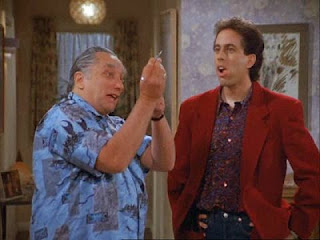 The Pen. This is what Seinfeld is, at its core. The Chinese Restaurant is a great example of the show's characterization and nothingness, The Contest is a great example of television greatness. But it is The Pen that is so Seinfeld, through and through. Jerry and Elaine go to Florida and they stay with their parents for varying degrees of motivation. The heat gets to Elaine which in turn causes the muscle relaxers to get to her. ("STELLA!") But the true genius of the show and its phenomenally real dialogue comes when Jerry takes the neighbor's pen that can write upside down. Such a frustrating episode and that's exactly why it's amazing.
Posted by Cracked Like An Egg at 2:00 PM