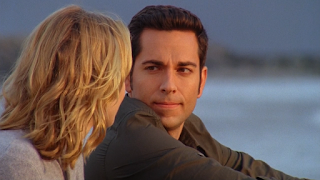 This episode still does it for me. The series finale of Chuck, Chuck Versus the Goodbye, changed me as a person because it never really sank in that the little-watched, but highly-beloved spy comedy-drama was coming to an end. It didn't sink in when Jeffster absolutely crushed their performance of Take on Me, it didn't sink in when Chuck had to "find the porn virus, find it now," it didn't sink in when John Casey actually hugged Chuck Bartowski. No, it sank in during the last scene when Chuck, on the same beach from the pilot, told Sarah their story as Rivers and Roads by The Head and the Heart played. I don't care what anyone says; this was a perfect way to end Chuck.
Posted by Cracked Like An Egg at 1:52 PM