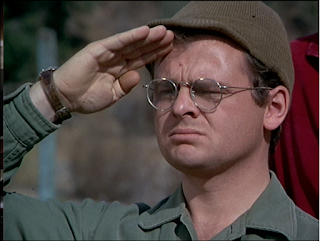 M*A*S*H is the same type of show as Cheers for me in that I have seen a very small handful of episodes from it, but not enough that I would have liked to so I plan to watch the whole show someday soon. But from what I have seen, I absolutely love Radar. My first exposure to Radar actually came from all the times that Gary Burghoff was on Match Game so I already had a fondness for the actor. I just had to make the connection with the character. The character who has earned a spot in the top forty-two by way of his cultural knowledge, loyalty, and commitment to ambition. His story is one of the more fascinating to me.

Radar O'Reilly: Supporting character on M*A*S*H portrayed by Gary Burghoff.
Posted by Cracked Like An Egg at 8:10 PM