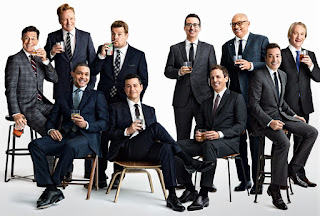 In a recent article for Vanity Fair, the journalist saw to it that all of the current hosts in late night television were gathered for a picture. This is a rare photograph (that might be on the same level of FDR, Churchill, and Stalin at Yalta) for sure because these ten people are not going to be easy to assemble again. From left to right, you have Stephen Colbert (The Late Show), Conan O'Brien (Conan), Trevor Noah (The Daily Show), James Corden The Late Late Show), Jimmy Kimmel (Jimmy Kimmel Live!), John Oliver (Last Week Tonight), Seth Meyers (Late Night), Larry Wilmore (The Nightly Show), Jimmy Fallon (The Tonight Show), and Bill Maher (Real Time). I really do like this picture and it's definitely worth sharing. This is the future of late night television for the next fifteen or twenty years now. Behold!
Posted by Cracked Like An Egg at 7:34 PM