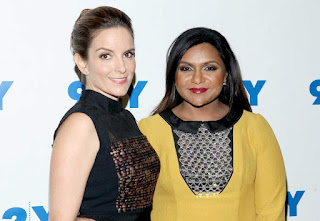 In promotion of her new book, Why Not Me?, Mindy Kaling hosted an event titled In Conversation with Tina Fey at 92nd Street in New York. Yes, that's right, the two greatest comedic minds of the past two decades and two of the funniest people of all-time joined each other on stage to have a conversation (that I hope against hope will be on YouTube one day) and play a game of Marry, Fuck, Kill that forced Mindy to choose between Stephen Colbert, Michael Fassbender, and B.J. Novak. Let's just say that Fassbender was the one who got the proverbial (and maybe literal) axe. If ever I find it on YouTube, I'll share it with you, but for now, just revel in the fact that these two were part of an event together. That's truly amazing!
Posted by Cracked Like An Egg at 7:39 PM