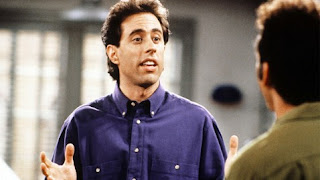 You have to love the titular character of Seinfeld who, like the actor playing him, is named Jerry Seinfeld. I just want to get something out of the way in regards to Seinfeld and this list. I like Kramer. I think Kramer is a great character and I am entertained by him. But Kramer is not going to be on this list. I get that lots of people love Kramer and I do, too, but not enough to put him in the top sixty. Okay, now that the air has been cleared, we can talk about Jerry. I like to think that Jerry is not far off from his real-world counterpart. Neurotic, observant, straight-played despite his role as "the funny one," and an obsessive lover of breakfast cereal and Superman. The little comments he makes about all the absurdities going on his life (in which he often partakes) will never get old. Just part of the many reasons that this is a rare example of a stand-up comedian turned television character who really just nails it. And it's also worth noting that I'm listening to Louis CK Pandora right now and Jerry Seinfeld just popped up. How about that?

Jerry Seinfeld: Lead character on Seinfeld portrayed by Jerry Seinfeld.
Posted by Cracked Like An Egg at 8:16 PM