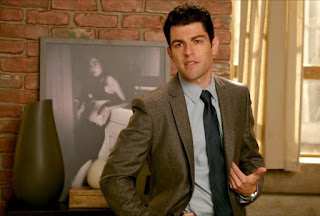 This might contradict something I've said in the past, but I'll write it anyway. New Girl: Come for Zooey Deschanel, stay for Schmidt. I don't even know if Schmidt is his first name or his last name, but I do know that he is so funny and so original that I will love him until the day I die. He says things like, "The economy sucks, bees are dying, and movies are pretty much all sequels now" and "Schmidt happens." He wears loafers and despises youths. He is such a strong personality that he warranted the creation of something called the Douchebag Jar. Schmidt is a lot to handle, but he is the type of person I would just love to know in real life. He's like the best version of a hipster.

Schmidt: Supporting character on New Girl portrayed by Max Greenfield.
Posted by Cracked Like An Egg at 8:21 PM