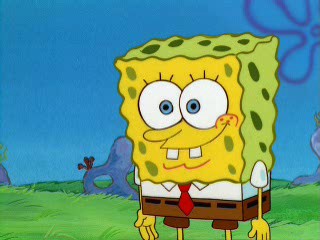 The three primary neighbors on the Nickelodeon cartoon, SpongeBob SquarePants, Patrick Star, Squidward Tentacles, and SpongeBob, mirror the development of children. When a child is born, he, or she, is really stupid because the brain hasn't formed yet so in that manner, there are similarities with Patrick because he is also really stupid. Then, SpongeBob is like a child who is under the age of fifteen probably who has not yet lost his innocence and still likes to have fun all the time and looks at everything through the eyes of a child. Then, once there is a death of innocence and cynicism begins to prevail over wide-eyed optimism, the children grow up and become like Squidward, who hates the world. It's just the way it goes. But I'll be damned if I don't love the fact that SpongeBob's fun is constantly attempted to be undermined by Squidward, his job is unimportant because Mr. Krabs only cares about money anyway, and his license is just an impossible dream he will never achieve, but despite all this, SpongeBob loves his life anyway. (Also, he is hilarious.)