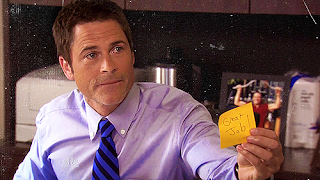 Remember when I talked about how Ben Wyatt was an amazing mid-series addition to a great comedy show? Well, now imagine how great Ben was but to an even larger extent! That's what Rob Lowe brought to Parks and Recreation and his beloved role of Chris Traeger. So many different everyday phrases originated from Chris. "This is literally...," "Ann Perkins!," and so many more have found their way into my daily lexicon. But the greater part of what made Chris such a good character and such a fun one to watch and love was his undying optimism. This quality made his depressed storylines that much harder because you just can't help but root for him.

Chris Traeger: Supporting character on Parks and Recreation portrayed by Rob Lowe.
Posted by Cracked Like An Egg at 8:00 PM