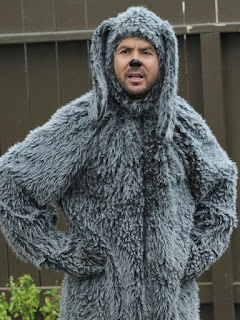 I never thought that one of the deepest, most layered characters in the history of my television knowledge (and television in general, really) would be played by an Australian man in a dog suit. But that's just how it was. Not only was Wilfred, the character, incredibly entertaining to watch - but he was also so psychologically fascinating. That scene in the penultimate episode of the show when he is a completely devastated wreck because he thinks he failed Ryan and he eventually drives himself to death in the rampage he embarks on is a piece of acting that will always stay with me. You really felt for Wilfred because Wilfred felt for Ryan. And he felt for all of us.

Wilfred: Lead character on Wilfred portrayed by Jason Gann.
Posted by Cracked Like An Egg at 6:48 PM