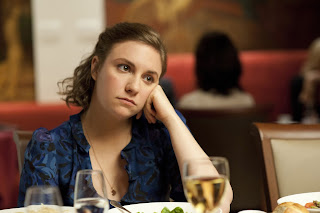 Like Lena Dunham, the main character on Girls is a very polarizing person because she has so much in common with Lena herself. Which makes sense because if you're going to create a character, write her as you know her. In that case, she wrote Hannah Horvath like she knew herself. And it reflects and really shines through and I believe just putting in complete honesty allows for a real character. That doesn't go unnoticed. And Hannah is admittedly very troubled, but that scene when she sings Wonderwall in the bathtub, she just felt real. That's why she's so high up, kicking off the top twenty-five.

Hannah Horvath: Lead character on Girls portrayed by Lena Dunham.
Posted by Cracked Like An Egg at 8:15 PM