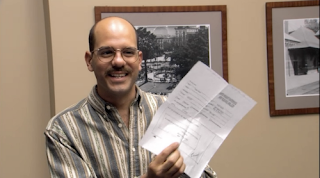 You know he was coming and here he is. Tobias. Funke. He's quite possibly the biggest character on Arrested Development in terms of comedy, personality, and sensibility, but more than anything he is the king of the one-liners. The parts of the show you can quote to anyone and, regardless if that person has seen Arrested Development or not, it can still be funny. The writing on that show is probably the best writing of any television show ever challenged only, maybe, by 30 Rock. And many of those great quotes were attributed to Tobias. He was always just so much fun to watch and that little moment when he is dressed as Tobias, but he is supposed to be Mrs. Featherbottom so he pretends like he's leaving the house, but he instead twists his body to go up the stairs is one of the funniest things ever done on television.

Tobias Funke: Supporting character on Arrested Development portrayed by David Cross.
Posted by Cracked Like An Egg at 6:42 PM