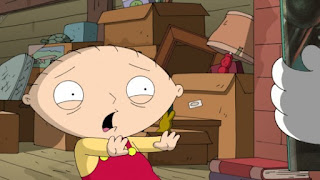 Stewie is one of those rare characters who actually gets better with age. Typically, many of the characteristics of some can be played out quickly and unless this is adapted, the character quickly becomes stale. Stewie was destined to get old really quickly (except on merchandising in Wal-Mart) with his unnecessarily extended and unnatural vocabulary, coupled with his malicious intentions directed at the members of his family. Fortunately, Stewie grew over time to sort of take over Brian's role as the voice of reason, a character who understands to a full extent what the audience is thinking about all of the nonsense going on around him. He's become boundlessly entertaining.

Stewie Griffin: Supporting character on Family Guy portrayed by Seth Macfarlane.
Posted by Cracked Like An Egg at 5:11 PM